The installed eclectors helped us to record the insects hatching out of the water. A large number of individuals but also a variety of species could be detected. Our comparative samples in Lake Epplesee clearly show how great the influence of fish is. Both the species diversity and the number of individuals are much lower in Epplesee than in the gravel pit since the beginning of sampling with the insect traps. For example, in the gravel pit, one trap had more than 300 individuals, while only about 40 individuals were found in Lake Epple. The gravel pit offers the possibility of unhindered dispersal due to the lack of a predator. Depending on the sampling site, the species differed minimally, with slender damselflies and other species found at sandier sites, which were not found at the gravel bottom.
In June, the newts were surveyed in the late evening, and an individual number of 30 newts was found. The two-week surveys starting in July showed a sharp decline in the number of individuals in the stones during the day. During the last sampling on 25.07 many of the stones were on dry ground, therefore not many newts could be identified. The high temperatures probably caused the water level to drop. 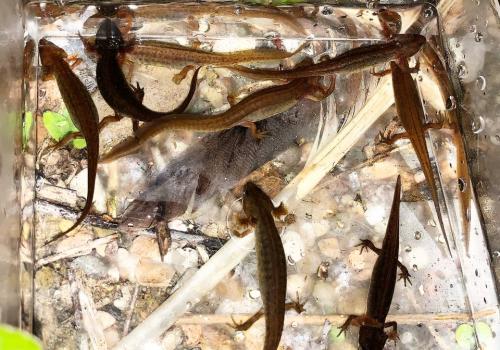